The SSM-EBF Boardroom Dialogue was created to facilitate direct discussions between industry and supervisors in 2015, shortly after the European Central Bank launched the Single Supervisory Mechanism that manages the supervision of the 119 largest banks in the Eurozone.

Opening this year’s meeting, Wim Mijs, Chief Executive Officer of the EBF, said that banks have continued to adapt themselves to the new banking landscape during the last four years, while 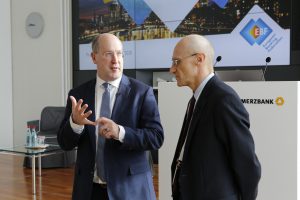 Andrea Enria, the new Chair of the ECB’s Supervisory Board, with Wim Mijs, Chief Executive Officer of the EBF. Photo: EBF

embracing the many other challenges that banks face.

“Not only financial stability is an objective of today’s banking sector, but also understanding rapidly changing customer preferences, adapting to the challenge of digital transformation and doing all this in a low-interest rate environment. These are significant challenges for the banking system in the next years to secure their primary role as providers of funding to the economy,” said Mr. Mijs.

Making one of his first public appearances since his appointment at the beginning of this year, ECB’s Supervisory Board Chair Andrea Enria said that transparency – both for the ECB and for banks – has become a key issue.

“As supervisors we must be more transparent and explain our decisions not only to banks, but also to investors and the public. This is crucial in a world where investors may get bailed in and where supervisors want to rely more on judgment,” Mr. Enria said.

“We are confronted with requests for radical change, often fuelled by discontent. People have been losing faith in the idea that the European project can make their lives better. I believe that it does make our lives better – from fundamental values such as lasting peace to small conveniences such as the ban on roaming charges; from exciting adventures such as the EU Space Programme to more sober endeavours such as European banking supervision.”

“But explaining ourselves better is not enough. We also need to listen more carefully. Only then will we understand the true nature of problems and the sources of discontent. And only then will we find the right policies to address them. As one of the founding fathers of the EU, Altiero Spinelli, once said, the quality of an idea is measured by its ability to rise again after failures. This is the overarching challenge we all face.”