FROM THE BOARD OF THE EUROPEAN BANKING FEDERATION:
x 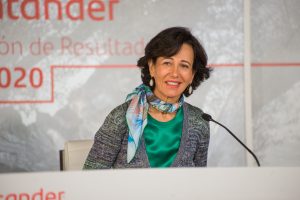 Commenting on her election, Ana Botín said, “I look forward to serving as President of the EBF in what will be a pivotal period for Europe, and thank Jean-Pierre for his leadership. Banks have played a vitally important role in the response to the pandemic and by working together with EBF members and the EBF executive team we will continue to support the economic recovery”.

Both the EBF Board and its executive management are delighted and excited by her election. She is recognized as a leading European banker and highly regarded for her vision and leadership. The position of President at the EBF is traditionally taken up by an active chief executive of a major international European bank. It is a non-executive role that provides an opportunity to provide high-level guidance on the direction of the federation.

The Board expressed its deepest and most sincere appreciation for Mr Mustier’s constructive engagement with the EBF and its members in 32 countries and for his exemplary leadership and guidance over the last two years. Mr Mustier was appointed as EBF President in 2019.

Commenting on Ana Botín election, Jean-Pierre Mustier said, “I am delighted that the EBF has chosen Ana Botín as my successor. She is a fantastic leader at the head of a true European and global bank, understanding very well the critical challenges faced by the European banking sector, and how the regulatory regime needs to evolve to address them. Her commitment and leadership will undoubtedly serve the EBF in achieving greater heights. I would like also to thank the EBF team for its professionalism and dedication to serve and represent the interests of the banking sector at European level”.

The European Banking Federation is the voice of the European banking sector, bringing together 32 national banking associations in Europe that together represent a significant majority of all banking assets in Europe, with 3,500 banks – large and small, wholesale and retail, local and international – while employing approximately two million people. EBF members represent banks that make available loans to the European economy in excess of €20 trillion and that reliably handle more than 400 million payment transactions per day. Launched in 1960, the EBF is committed to a single market for financial services in the European Union and to supporting policies that foster economic growth.

We are excited to announce that we are expanding our knowledge partnership with @Deloitte to join forces on cyber resilience and digital assets!

First up is our joint EBF #DigitalThursdays on DORA coming on 23rd February! Discover more and stay tuned 👉https://digitalthursdays.eu/