VADUZ, Liechtenstein, 20 November 2019 — Christian Ossig, Chief Executive of the association of German banks Bankenverband, has been appointed as Chairman of the European Banking Federation’s Executive Committee for a two-year term from January 2020.

Christian Ossig has a background in international banking and joined the association of German banks in 2016. From January he will join the EBF’s leadership troika that also includes Wim Mijs as Chief Executive Officer and Jean Pierre Mustier, CEO of Unicredit Group, as President of the Board, at a time when Europe is standing at a critical juncture that will determine the future of the European economy and its financial sector. 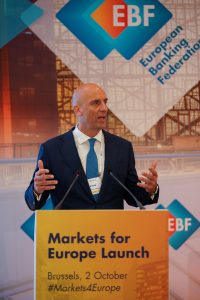 Christian Ossig, Chief Executive of the association of German banks Bankenverband and Chair of EBF Executive Committee as of January 2020

“I look forward to taking on this new task at an exciting time and thank Giovanni for the valuable work he has done over the past four years. Be it climate change or digitalization, Europe faces major challenges and opportunities. The same goes for European banks. By completing Banking Union, better integrating European financial markets and establishing a true Capital Markets Union, we can lay the foundations for more economic growth and an efficient banking sector. This also includes appropriate implementation of the new Basel capital requirements. It’s clear to me that for these tasks we need more Europe, not less.”

“These four years of double mandate have proved extremely exciting and challenging. They coincided with the setup of the Banking Union – a demanding task for the whole industry where EBF succeeded in establishing close and fruitful relationships with Supervisors – and with a period of dramatic development for banks, due to flooding regulation and disrupting technologies that brought into the banking landscape other players like GAFAs and FinTechs. Christian, thanks to his international background and strong knowledge of the financial industry, is perfectly positioned to continue the challenge of confirming EBF as the most accountable interlocutor of EU institutions for the European banking sector.”

The European Banking Federation is the voice of the European banking sector, bringing together national banking associations from across Europe. The EBF is committed to a thriving European economy that is underpinned by a stable, secure and inclusive financial ecosystem, and to a flourishing society where financing is available to fund the dreams of citizens, businesses and innovators everywhere. Website: www.ebf.eu