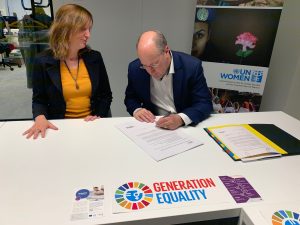 EBF CEO Wim Mijs signs the Women’s Empowerment Principles at the office of the United Nations in Brussels.

BRUSSELS, 26 November 2019 – The European Banking Federation has adopted the Women’s Empowerment Principles, joining over 2,800 other businesses around the world partnering with UN Women on the important journey of achieving gender equality. These principles were designed to offer businesses guidance on how to promote gender equality and women’s empowerment in the workplace, marketplace and community. The WEPs is a joint initiative of UN Women and the United Nations Global Compact.

By endorsing the Women’s Empowerment Principles and cooperating with UN Women, the EBF intends to become a role model and enabler in empowering women in banking in their many roles as employees, managers and users of banking services. Greater inclusion of women as users, providers, and regulators of financial services would foster greater stability in the banking system and would act as a catalyst for economic growth. 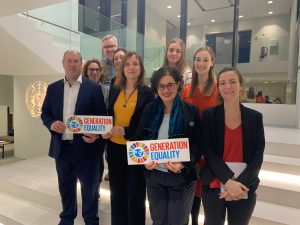 The EBF and UN delegations at the UN offices in Brussels.

In a multi-year programme, and in partnership with UN Women and EBF’s member associations, the EBF will implement the WEPs across four distinct workstreams:

The implementation of the WEPs will involve a series of events and publications, starting in 2020. The EBF will report on progress on its implementation annually.

“By adopting these principles, we intend to take a leading and facilitating role in this field, both by setting an example in our own organization and by providing a platform for the banking sector to further increase awareness, familiarise and operationalise.

Endorsing the Women’s Empowerment Principles is a logical consequence in our responsible banking journey. One of the earlier milestones of our involvement in gender equality was the EU’s Digital4Her initiative, which I was honoured to sign in 2018. This year, we became an early endorser of the United Nations Principles for Responsible Banking, which were signed in September 2019 in New York. This step provided a framework for the EBF to work on the totality of the Sustainable Development Goals (SDGs), which includes SDG 5 (gender equality). It was in this context that we started looking at gender equality in a more systematic way which has led us to fully embrace the WEPs.

Finance plays a key role in the economy. Having gender parity in business and finance  and a better balance of  women and men at all levels in the finance sector is not only good policy, but also good for the banking business itself, and good for economic growth, income equality and financial stability. Women are underrepresented at all levels of the global financial system, from depositors and borrowers to bank board members and regulators. Although the EU fares much better than many other regions in the world, we can improve our economies and the lives of millions of people by aiming higher. I am pleased to partner with UN Women to promote policies that help achieve great gender equality in all aspects of the EBF’s activities, with the ultimate goal of contributing to better practices in the wider financial sector.”

“We congratulate the European Banking Federation for taking the first step on their WEPs journey. We consider EBF a key partner in closing gender gaps in the workplace, marketplace and community. For the EBF network of organizations and companies to remain attractive employers for new generations of women and men, placing gender equality at its core of operations is paramount.”

For more info on the Principles:

About the European Banking Federation:

The European Banking Federation is the voice of the European banking sector, bringing together national banking associations from across Europe. The EBF is committed to a thriving European economy that is underpinned by a stable, secure and inclusive financial ecosystem, and to a flourishing society where financing is available to fund the dreams of citizens, businesses and innovators everywhere. Website: www.ebf.eu Twitter: @EBFeu.

About the Women’s Empowerment Principles:

The Women’s Empowerment Principles (WEPs) guide businesses on how to promote gender equality and empower women in the workplace, marketplace and community. Jointly established by the UN Global Compact and UN Women, the WEPs are underpinned by international labour standards and human rights and by the recognition that businesses have an important role in promoting gender equality and women’s empowerment.

Adopting the seven principles is the best way that businesses can deliver on the ambitions for gender equality and women’s empowerment as outlined in the 2030 Agenda on Sustainable Development and in the 17 SDGs. Website: www.empowerwomen.org/weps Twitter: @WEPrinciples

➡️ECB to activate first line of defense in bond market
➡️Lagarde plays down recession, ECB to ‘move faster’ on rates
➡️ECB to drain cash in offset to a new yield-capping scheme