Speech by Head of Supervision Gonzalo Gasos: getting it right on the risk reduction package 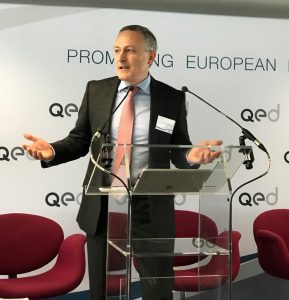 A very good afternoon to you all,

In the same conference last year, I welcomed everyone to the tenth anniversary of the financial crisis which began with severe liquidity problems in some banks, followed by insolvency and widespread systemic risk. This is precisely what university students are reading today on economic history, along with the oil price shock in the seventies, the Black Monday of 1987 and the emerging markets crisis of the nineties.

You might agree with me that the financial crisis of 2007 is part of history.

So, welcome to the future.

Financial stability will continue being part of policy making but going forward other objectives are also relevant and even more important. The decisions that European policy makers will make in the next months are not just about financial stability. The options in front of us are about efficiency, competitiveness and business. Let´s not forget that banks are businesses, not administrative compliance offices.

With this in mind, I would like to draw your attention to several key decisions in the context of the Risk Reduction Package:

First decision: what to do with the Fundamental Review of the Trading Book?

The Commission rightfully included the FRTB in the original proposal of November 2016 as it was meant to be implemented globally in 2019. But now the Basel Committee has aligned the FRTB with the timeline of the finalisation of Basel III which is 2022. A consultation at global level is currently underway.

Against this background, the Bulgarian Presidency is confronted with 2 options:

Second decision: The treatment of repo transactions in the Net Stable Funding Ratio.

Repo markets play a key role in facilitating the flow of cash and securities around the financial system. A well-functioning repo market supports liquidity and contributes to the efficient allocation of capital. This is central to the business of European corporates.

The trend in the EU repo market since 2014 shows that the percentage of cash placed in repos has declined from more than 40% to less than 20%; the number of active counterparties, in a sample of 11, has been reduced to just 4. The NSFR could compound that negative trend if the asymmetric treatment between repos and reverse repos keeps on threatening market liquidity.

There are 2 plausible options here:

Decision number 3: Do we believe in an EU integrated market for financial services?

If your response is yes, then the liquidity subgroup status should be automatically granted for subsidiaries within the Union. Likewise, the preferential treatment for intragroup transactions should be granted automatically and not subject to supervisory discretion.

After all, the European Union is a single market, with a single rulebook and, in the Euro Area, a single supervisor and a single resolution Board. This needs to be reflected upon.

I am puzzled about the willingness of some Member States to impose systemic buffers within the scope of Pillar 2. This is regrettable, in my view.

If the Commission’s original proposal to tackle systemic risk out of Pillar 2 is not respected, the result may be less credit available in countries that mostly need it.

Decision 5: About the export business of corporates and SMEs

Other regulators worldwide have already opted for funding requirements which are significantly lower than in the European proposals of 15%, and do not take their maturity into account. There is a strong case for the EU to follow suit.

Also, the exemption from the leverage ratio should be granted to Export Credit Guarantees without credit step conditions. And it should be applied in all currencies to include the majority of exposures which are denominated in US dollars.

Decision number 6: Should the penalisation to bank software continue?

Banks contribute to the digitalisation of the EU economy. They need to invest in software development to remain competitive and to strengthen their cybersecurity. Many MEPs are aware of this fact and have tabled amendments to remove the deduction from capital. The Council should put this crucial issue over the table as soon as possible. This cannot be ignored.

Some argue that software might not have value in liquidation. I don’t agree with that. Let me explain: there are 3 tools to resolve a bank: the bail-in, the bridge bank and the sale of business.

The main goal of the bail-in and the bridge bank, is to maintain the critical functions after the resolution without disruption; software is precisely that: a critical function. You may agree with me that a bank can’t operate without its software. Yet, how come in current legislation more value is given to a lifeless table than to vital software. Up to 12 times more value in terms of cost of capital. This needs to be fixed as soon as possible.

As to the sale of business in resolution, let me give you a clear example: a bank that was resolved by the Single Resolution Board 10 months ago is still using the same software. Do we need more evidence?

Regulatory efficiency, competitive profile of European banks and finance to European businesses. This is the way forward.

If all these points were taken on board, we would be getting it right.

Thank you for your attention.

“There is no one way to define a CSO, other than as a versatile individual who needs to act in different capacities as an agent of change, as a mediator, coordinator, influencer, and business leader,” says @Wim_Mijs.

🌱 59 ESG rating providers currently active in EU - there is a small number of very large non-EU providers, and a large number of significantly smaller EU entities