EBF president says that governments, regulators and banks in Europe should work together to accelerate the green transition

EBF president says that governments, regulators and banks in Europe should work together to accelerate the green transition

Brussels, 29 September 2022 — Ana Botín, European Banking Federation (EBF) President and Executive Chair of Banco Santander, has today urged European leaders to work together with banks to accelerate the transition to net zero in response to the energy and climate crisis. Speaking at the EBF’s European Banking Summit dedicated to the theme of Reinforcing Resilience in a new Reality, she said:

“After a long period of economic and geo-political stability, we are once again being buffeted by the shock of change. The multiple challenges we face are forcing governments to make fundamental changes to policy – on energy, on defence, on the economy – in real time.”

“The energy crisis has created a massive incentive for the EU to accelerate the transition to net zero. In the medium term, investment in renewables will help lower costs for business, improve competitiveness, and create jobs.”

She welcomed the EU’s ambitious plans to invest in the transitions and highlighted the urgent need for action to end Europe’s current dependency on Russian energy and meet net zero targets, saying “we now need to turn ambitions into action, and get the money that’s been committed out of the door, supporting projects–large and small – to cut emissions.”

Botín highlighted the importance of stimulating economic growth to drive the transition, and said that Europe’s banks are ready to support that growth. She said:

“In recent years, European banks have built up more capital than our US counterparts – more than 250 billion euros since 2014 in a period when CET1 ratios remained stable in the US. Europe’s banks are in a strong position to help our economies not just weather the storm, but power the growth we need.”

“Transition plans require large amounts of capital to be invested and new technologies to be developed. To do that we need to tap the large savings base that we have in Europe and direct it to businesses, SMEs and families that need funding. The banks are the institutions best suited to do this role. Billions are already flowing into the transition, but there is an enormous appetite to do more.”

Governments, regulators, and bank must work together to unleash investment

Botín argued that adapting regulation to meet the challenges of today will be key to unlocking the capital and investment required to finance the transition. She said:

“We need to work together to ensure that Europe’s banks can act in a counter-cyclical way and deploy capital to address the immediate crisis; and do our jobs as effective transmitters of monetary policy to ensure we can deliver reliable, renewable and affordable energy in the years ahead.”

“To unleash investment, we need to increase confidence, and develop a framework that properly incentivises investments. Investors need clear business and market models if they are to fund new technologies. They need plans which show how the highest emitting sectors will progress from brown to green. Once again, banks are ready to help [and] do more, to help not just big business, but SMEs and individuals, go green.”

“The message from us to our governments and regulators is clear: we are ready to do more, we are on your side. Let’s work together to get through the challenges ahead, to make Europe more resilient, and to get our economies going again”.

“Banks have proven themselves to be reliable partners for authorities and we will continue to be there for our customers through good times and bad. We stand ready to work with policymakers to support businesses and families that may face a tough winter ahead. At the same time, we must continue to push for a regulatory framework that can deliver a competitive, profitable and strong banking sector to serve the European economy. Europe needs investment to face the challenges ahead and deliver inclusive growth for all citizens – and this is the straightest path to getting there”.

The European Banking Federation is the voice of the European banking sector, bringing together 32 national banking associations in Europe that together represent a significant majority of all banking assets in Europe, with 3,500 banks – large and small, wholesale and retail, local and international – while employing approximately two million people. EBF members represent banks that make available loans to the European economy in excess of €20 trillion and that reliably handle more than 400 million payment transactions per day. Launched in 1960, the EBF is committed to a single market for financial services in the European Union and to supporting policies that foster economic growth. 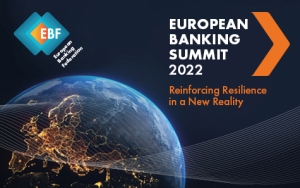