Unless otherwise noted, all data, graphs and tables have been produced to illustrate EU 28 data. The EU 28 data contained in this chapter has been compiled from publicly available information released by the European Central Bank unless otherwise noted. The data relevant for EFTA countries have been compiled from the corresponding national central bank, financial supervisory authority, national office of statistics and national banking associations members of the European Banking Federation.

The core banking activities of raising deposits from and providing credit to customers are crucial for Europe’s banks. Private sector deposits and loans grew in 2019, particularly for households and non-financial corporations.

Domestic or euro area deposit liabilities in the EU rose by almost 5% to €24.7 trillion, excluding euro area deposits of non-euro area monetary financial institutions (MFIs). Monetary financial institution deposits saw the largest increase in percentage, 26%, in Denmark, while France had the largest increase in real terms, by about €182 billion. Deposits of non-MFIs excluding central government rose by €168 billion in France, by €137 billion in the United Kingdom and by €135 billion in Germany.

The growth continues to be driven by an increase in deposits from households (including non-profit institutions serving households), which rose by 6.2% year-on-year to €10.3 trillion and non-financial corporations (NFCs), up by 2.9% to €3.5 trillion. Germany, UK and France accounted for about two-thirds of the €586 billion increase in euro area household deposits in 2019.

The total value of loans outstanding from EU MFIs increased by 3.9% in 2019 to more than €26.1 trillion. The increase mainly came from growth in loans to non-MFIs, excluding general government, which rose by 3.8% year-on-year to almost more than €16.6 trillion.

As with deposits, United Kingdom, France and Germany accounted for about three-quarters of the €1.0 trillion increase in loans outstanding in the EU.

Real estate activities, professional, scientific and technical activities and administrative and support service activities accounted for more than one third (37.6%) of loans outstanding at the end of 2019, and up from 30.8% in Q4 2008. Manufacturing and the wholesale and retail trades accounted for 14.3% and 13% respectively.

Lending standards, i.e. banks’ internal guidelines or loan approval criteria, continued to ease in the euro area throughout 2019 for loans to both SMEs and large enterprises, reflecting the general trend evident since 2014. 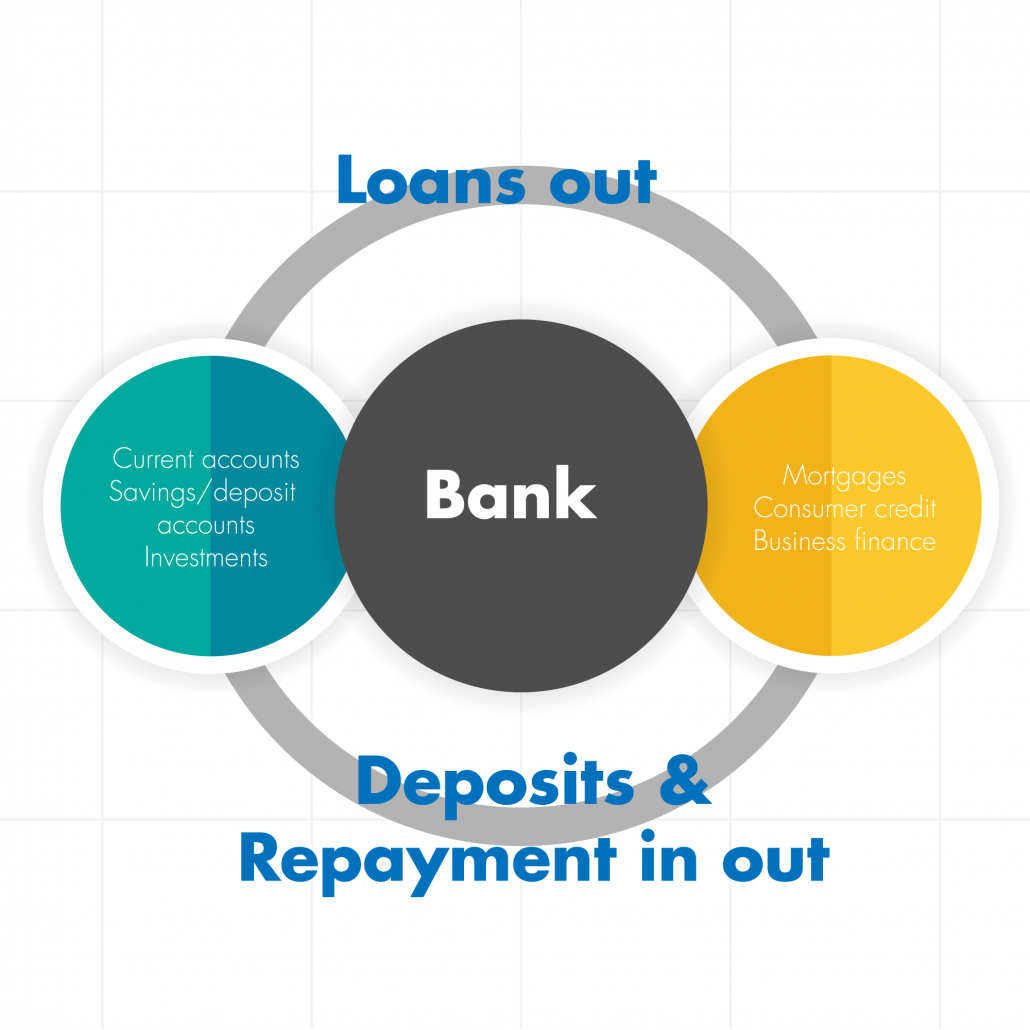 Banks are also key players in national and international payment systems. Almost 98 billion cashless payments were made by non-MFIs in the EU area in 2019 and 150 billion in EU-28. Slightly less than half (46.6 billion) of those were card payments, while about one quarter were credit transfers (22.3 billion) or direct debits (21.3 billion). In the EU-28, cashless payments accounted for slightly over 150 billion transaction with United Kingdom, France and Denmark leding with about 50% of the total payments.