EBF press release on the November 2017 Board meeting 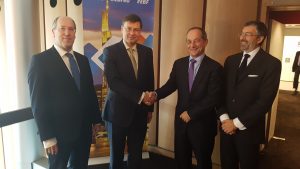 BRUSSELS, 24 November – European banks, represented by the Board members of the European Banking Federation, on Friday agreed to step up their work on funding the real economy with a priority focus on financing the energy transition and on the rapid digital shift in the global banking sector.

European banks already are lending more as access to funding is improving for all types of loans. Evidence of this development was again provided in the third quarter by the ECB’s bank lending survey. The quarterly ECB survey showed that euro area credit standards eased while demand for loans and mortgages rose.

In order not to undermine the nascent economic recovery in Europe the EBF Board called on policymakers to carefully calibrate the range of EU and international regulatory measures for banks that are nearing completion. The Board specifically outlined the upcoming finalisation of the Basel framework, the completion of the EU Risk Reduction Package, the EU action plan to tackle Non-Performing Loans and the introduction of the second EU Payment Services Directive, known as PSD2.

“Our sector is firmly committed to financing growth and prosperity in Europe,” said EBF President Frederic Oudea. “In a bank-financed economy such as the one as we have in Europe we need clarity and visibility so that we as lenders can continue to deliver on our commitment. This also requires a carefully assessed and calibrated finalisation of the regulatory framework and a pragmatic, realistic approach.”

Addressing the finalisation of the global bank regulatory capital requirements by the Basel Committee on Banking Supervision, the EBF Board reiterated its concerns over the process commonly known as ‘Basel IV’. The Board notes that the Basel Committee has booked only limited progress in its discussions during 2016 and 2017. Some specific measures currently under discussion, such as the proposed Output Floor, may unbalance risk sensitivities and threaten financing in the European economy by harming low-risk exposures, in particular the massive market for residential mortgages.

The Basel IV framework should only be finalized in such a way that it does not harm the European economy and the international competitiveness of European banks. Should it turn out that the Basel Committee is unable to reach a compromise without a floor, then

appropriate action should be taken at the European level to mitigate the damage to the real economy.

In his presence EBF board members, while underlining that banks embrace innovation and value competition, expressed their serious concern over the European Commission’s upcoming adoption of the technical standards for secure communication under PSD2. These standards should not come at the expense of privacy and security at a time when data breaches and cyber incidents are rising exponentially.

More broadly the banking sector reiterated its commitment to financing the real economy and expressed its specific support actions designed to improve the functioning of the European single market, including Capital Markets Union and the plans to deepen Economic and Monetary Union, and to finance the energy transition. The EBF Board also discussed the need for achieving a real single market for the banking sector.

EBF board members approved the creation of a new Steering Committee for Financing Growth. The high-level committee will enable the banking sector to enhance the funding of the real economy. Christian Ossig, the incoming Chief Executive Officer of BdB, the German national banking association, was appointed as committee chairman.

The EBF Board renewed the two-year mandate of Giovanni Sabatini, Director-General of the Italian banking association ABI, as Chairman of the EBF Executive Committee. His second two-year term will start in January.

“At a time when the European economies are showing clear signs of improvement we have adopted a strategy for 2018 that ensures EBF can further develop its role as a reliable and trustworthy partner for all stakeholders, working for an efficient and safe banking sector in Europe that contributes to the prosperity for all in Europe,” said Mr Sabatini.

For more on the outcome of the 125th EBF Board meeting see the annex attached.

The European Banking Federation is the voice of the European banking sector, uniting 32 national banking associations in Europe that together represent some 3,500 banks – large and small, wholesale and retail, local and international – employing approximately two million people. EBF members represent banks that make available loans to the European economy in excess of €20 trillion and that securely handle more than 400 million payment transactions per day. Launched in 1960, the EBF is committed to creating a single market for financial services in the European Union and to supporting policies that foster economic growth.

Annex on the outcome of the

125th Board meeting of the EBF

European banks anticipate the adoption by the European Commission on the Regulatory and Technical Standards (RTS) for the implementation of PSD2, the second EU Payment Services Directive. Banks support the creation of an efficient and effective EU ecosystem of interoperable interfaces (APIs[1]) for secure and reliable online payments and communication via the banks’ infrastructure between third-party service providers and clients.

But while banks embrace innovation and value competition, the technical standards for secure customer authentication under PSD2 should not come at the expense of privacy and security. Customers expect banks to protect their personal data, an expectation at the core of trust in financial institutions.

At a time when cybersecurity becomes increasingly important the EU risks introducing a system for online payments that is potentially harmful for bank account holders and the banks that offer these accounts. The forthcoming decision on the RTS puts consumer data at risk and places a huge responsibility on the European Commission.

The EBF Board calls on EU policymakers to introduce the RTS for PSD2 in such a way that privacy of client data and security of bank accounts are fully respected. Policymakers should not permit screen-scraping[2], even as a fall-back, as a way for third-party service providers to access client data and instead should focus on fully secure solutions.

European banks see the EU Risk Reduction package as an opportunity to improve EU banking regulation in a way that respects lending and economic growth with less burdensome rules.

Policymakers are asked to consider the overlap of the EU measures with certain elements of the Basel IV package which are still under technical review, like the Fundamental Review of the Trading Book. The EBF Board asks policymakers to put on hold any EU decisions on such measures until international decisions on the Basel IV framework have been completed.

The EBF looks forward to the European Parliament report by MEP Peter Simon on the Capital Requirements Regulation (CRR) and Directive (CRD). Introducing more proportionate rules in the revised texts of the CRR and CRD is of high importance to European banks. The EBF is convinced that provisions on reporting and disclosure requirements all should include more proportionally.

The revision of the CRR presents an opportunity for Europe to establish fair competition and to compete for global leadership in digital innovation. For that purpose, the EBF recommends the EU properly recognizes the value of bank software. For banks this is a very relevant aspect of the CRR which should not be ignored in the update.

EU banks continue to fully support the Banking Union which needs to be completed with a practicable compromise on the European Deposit Insurance System (EDIS) in order for the EU to be recognized as a single jurisdiction.

The EBF Board expressed its appreciation for the ongoing work of the European Commission’s High-Level Expert Group on Sustainable Finance and looks forward to the final recommendations, expected to be presented in January, and the subsequent EU action plan which is expected to include specific incentives to support green finance.

Banks are committed to the principle of sustainable development. Sustainability means long-term business success coupled with environmental, social and corporate responsibility. Questions of sustainable finance are becoming increasing central in the debate on sustainability and are a matter of huge importance to banks as well.

Banks play an essential and pivotal role in financing the global transition towards a sustainable economy. The banking sector, including the EBF, is ready to offer its extensive knowledge in lending, investment and smart advisory services, to achieve sustainability goals for the benefit of society.

The EBF Board noted the positive trend in the Non-Performing Loans (NPL) ratio of the EU banking system, which has declined continuously during the last ten quarters, from 6.5% in December 2015 to 4.5% in June 2017. Far from complacency the EBF generally supports the EU Council action plan to avoid in the future the piling up of NPLs not adequately provisioned after assessing the impact on EU economies.

In this context, the EBF called on the EU to amend their proposals on preventive restructuring frameworks, second chance and measures to increase the efficiency of restructuring, insolvency and discharge procedures and amending Directive 2012/30/EU which dilute the protection of secured creditors and the quality of their collateral. This proposal, if implemented as proposed by the Commission, will inevitably lead to increased cost of future loans and may increase a number of future NPLs.

Board members exchanged views on the rapid digital shift in the global banking sector and welcomed fresh initiatives by the EBF in the field of financial technology, or FinTech, including specific workstreams on data and cloud banking.

The EBF Board expressed its support for actions on financial education and literacy, digital skills and cybersecurity awareness which are all designed to better position financial services users in today’s digital society.

The impact of the digital shift in the banking sector is also seen as an important topic for discussion in the sector’s dialogue with the social partners.

The EBF is keen to see clarity and certainty for banks during the Brexit process so that the banking sector can continue financing the economy while serving customers to the fullest extent possible and without undue disruption. The EBF is analysing the impact on various business lines from the point of view of clients, and stands ready to support EU officials and contribute technical recommendations.

16 May 2017: EBF asks Commission to support ban on screen scraping

EU Framework on Crowd and P2P finance – EBF reaction to the Inception...
Scroll to top