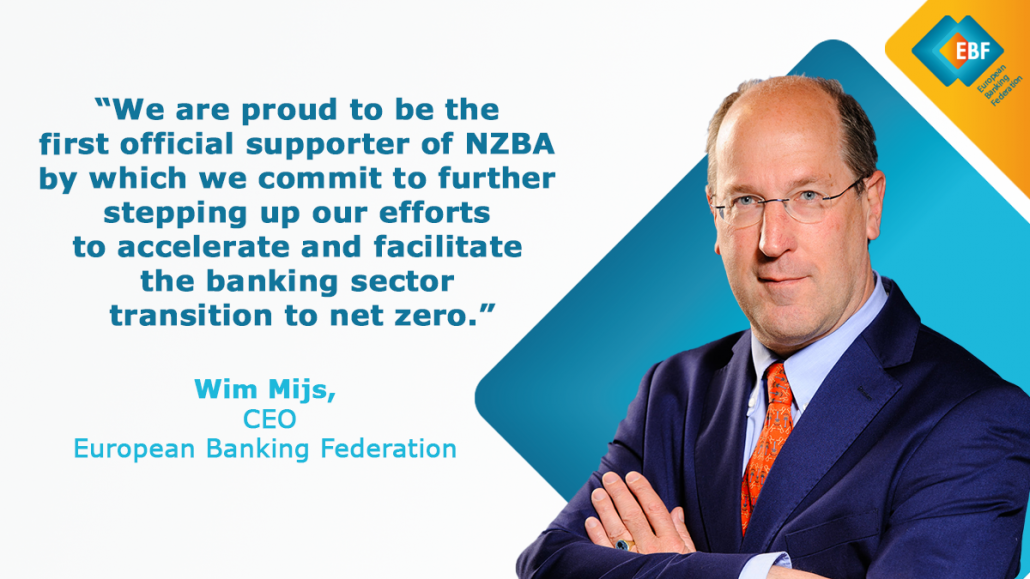 To address the climate emergency, we need an urgent shift of both private and public sector resources towards a low-carbon economy. Financial institutions are not only going to be impacted by climate change but are also going to be a big part of the solution. Banks’ financing of sustainable business, investments and activities will help reduce and mitigate the impact of climate change given our sector’s proximity to clients.

As part of the Glasgow Financial Alliance for Net Zero (GFANZ), the UN convened an industry-led initiative – the Net Zero Banking Alliance. The alliance brought together banks representing over a third of global banking assets, including the three European banks with the highest exposure to fossil fuels. This is important because, with just five per cent of banks, we cover forty-five per cent of overall emissions.

NZBA banks are not only committing to aligning their portfolios with net-zero emissions by 2050, but also to setting intermediary targets, focusing on priority sectors where they can have the most significant impact, in a transparent and publicly accountable way. While GFANZ was viewed with skepticism by some, initiatives like this will no doubt have a spillover effect on the corporate sectors and contribute to risk mitigation as they target aligning with Paris objectives, thus decreasing the transition risks. We are proud to be the first official supporter of NZBA by which we commit to further stepping up our efforts to accelerate and facilitate the banking sector transition to net zero.

Banks’ allocation of resources towards a low-carbon economy is key in financing the transition. This shift can only be made, if we put in place incentives which guide the underlying economy. We can only tackle the climate crisis through collective action across the public and private sectors. The progress is heavily dependent upon governments delivering on their action plans and industrial strategies. We need greater clarity and predictability on policy actions as well as greater national political ambition to align the underlying economic incentives with the Paris Agreement in the short to medium term.

Europe is leading the sustainability transformation on many fronts. The decarbonization of Europe will however not suffice to prevent a global climate catastrophe by itself. Europe needs to turn its focus outside and provide expertise and resources if we are to guide and lead the transition to net-zero. This is also necessary because the financial system is global. Nearly a quarter of EU banks’ exposures concern entities outside of the EU. Global cooperation and harmonization are key to preventing market fragmentation and facilitating the flow of capital where most needed.

One can debate the success of the Glasgow climate conference. The glass can be seen half full or half empty. The plethora of pledges, both private and public, needs to be translated into concrete actions. Looking back, COP26 will be judged on actions, not words.

➡️ECB to activate first line of defense in bond market
➡️Lagarde plays down recession, ECB to ‘move faster’ on rates
➡️ECB to drain cash in offset to a new yield-capping scheme

‘COP 26 final assessment and what’s next’ by Antonio Ballabriga,...
Scroll to top