The Chief Executive Officer of the European Banking Federation banks need to adjust their credit policies as startups.

Banking should not fear the ‘ brave new world of fintechs’. A new financial industry that applies technology to improve financial activities is on everyone’s lips these days. But when 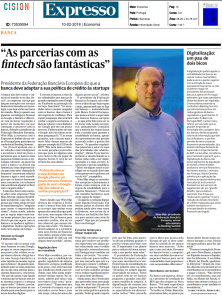 it comes to the technological giants as Amazon or Google the story is different. There must be regulation from the moment they start competing with the banks.

“Fintechs help us to have smarter and more affordable solutions and allow smaller banks to have access to relevant technology. The partnerships between banking and fintech are fantastic; these companies act as a ‘wake-up call’. They find cheap and agile solutions at the technological level that take banks years to find and if banks don’t wake up someone else will get their business.”

Should there be more control over these companies? Wim Mijs advocates for a degree of flexibility as they are companies still in the process of experimentation and “no one wants to kill entrepreneurship”. Thus, he admits that the rules are softer in a first phase for fintechs that interact with banks and help digitise many operations in a short period of time.

Amazon or Google is something else

“It is not the same with Amazon or Google, because if these companies start giving financing, supervisors should force them to have a bank licence and be subject to the same rules as banks.” When asked whether or not these companies are a threat to the financial system, he observed: “What I don’t like is that they perform the same functions as banks without having the same rules or supervision.” Wim Mijs says, however, that banks need a jolt to wake up to the new digital challenges.

And do banks run the risk of being replaced by big exposure brands like Google or Facebook in providing banking services? “Societies may be angry with banks, but banking is a trust business. To pick up savings it won’t be easy to steal the business from the banks. The idea of putting my money on Google makes me a little nervous. Although I like using Google but I wouldn’t put my savings there.“How about the new generations? Have they even heard of  Caixa Geral de Depósitos or Banco Comercial Português ?  “I wouldn’t be so sure. The new generations have already realised that there is no such thing as a cost-free item and it will be through your data”.

Another challenge that Wim Mijs highlights concerns the way in which the bankroll deals today with startups, which often just have an idea to develop, and no office. “Now, the banks, to grant credit, have to have collateral, which in these companies does not exist. Banks must adapt and find a new way to finance these ideas, because the opportunity of a potentially successful business is there”.

Regulation should be re-evaluated

Wim Mijs considers, on the other hand, that the redefinition of the European financial system, justified by the serious international crisis that broke out in 2008, is now complete, though many rules have yet to be implemented. At the same time, he admits it may be necessary to make a “technical stop”. “We hope that the European Commission will check to see whether everything is going well and if it is not, perhaps the Commission should review its position again”. Wim calls for a balance to be sought, in particular by the European Central Bank, which supervises European banks. He considers that the majority of the rules make perfect sense to guarantee the stability of the bank, even though they represent increased pressure on the management of the banks. “Regulatory issues have become administrations’ top priorities” he says.

This is why it is important to monitor whether the way they are being implemented is correct. And above all, we need to simplify. “In some cases it is perhaps justified to see whether you can say one thing in 10 words instead of 100.” Wim commends the way in which the European authorities advanced the stability rules for the financial system. “They did a fantastic job in a short time. I admit to feeling some frustration regarding digital development. In many countries, customers are not allowed to open a long-distance account without having to go to a bank to sign a series of papers. Conversely in Portugal it is signing papers at a bank is no longer necessary when opening a long-distance account.”

It takes time to clean up the mess

The EBF CEO recognizes the need to continue to work towards solving the major NPL problem in Portugal, Italy and Greece. “The economies are a little better, so I agree that this is the time to repair the roof,” he says. “Portugal is on the right track because it is significantly reducing the size of this problem.” Still, isn’t it discouraging that after all these years there’s still such a high level of bad credit?” You have to take into account the starting point. I have great respect for what has been done so far, as it is part of a huge problem and it takes time to deal with it. What is essential is to reduce the problem in a durable way,” Wim goes on to say.

Wim Mijs believes that more cross-border consolidation movements in banking may be in the pipeline. “We should always have some diversity in banking. All countries have to have small and large banks with different business models. Digitising the system is leading some banks to specialize in specific niches”. He does not agree with the idea that Europe has to accept having fewer and bigger banks. “I think it’s a bad idea. We must have strong and competitive banks but we must also have small banks to serve smaller communities with different needs.”

On Portuguese banking, Wim highlights the process of resolution of the BES that gave rise to the Novo Banco. “It was an experience that ultimately ended well“, he says.

“I believe in the banking union, we need it, the steps that were taken were very positive during the crisis. It needed political courage to set it up. We had the example of Portugal, with the Novo Banco, and then in Spain the Banco Popular, a very different case. And in Italy, Monti Dei Paschi, was equally distinct.” After the crisis, he says, it was argued whether it should be taxpayers or investors who pay the bill. “It should not be the taxpayers, but in Italy, in Monti Dei Paschi, we had an ironic mixture, the taxpayers were also investors…”

Find the original interview (PT) via the link below:

📌The series of webinars by EBF and @SPGMarketIntel is back with an event on Basel capital reforms in Europe! This December, join our experts to explore the impact of such reforms and the challenges ahead for banks.

A successful collaboration is ahead of us!